The month of June is the time of final chapters and new beginnings.

From graduation season and the start of summer, to the end of the first half of the year to the start of the second half, people often use this time to reflect on all that has happened thus far. However, many people now associate June with a “new” celebration — Pride Month.

Corporations everywhere change their logos to show their support for the LGBTQ+ community and Pride celebrations are held across the country. But what exactly does it mean to celebrate Pride Month?

While the Stonewall Riots that began on June 28, 1969 is one of the more well-known Pride events because of how it sparked the modern LGBTQ+ rights movement, LGBTQ+ advocates have made their voices heard for decades and grouped together to fight against their oppression.

Since the Stonewall Riots led to the creation of Pride as we know it today, Pride celebrations and parades around the world are held during the month of June to commemorate the event’s anniversary.

With the increasing support of the LGBTQ+ community comes the increase of attendees at these parades, from members of the community to allies showing their support.

However, many people seem to forget that Pride celebrations themselves are political in nature, as the Stonewall Riots occurred as a protest to being discriminated against in gay bars and clubs that were constantly raided by police.

One common misconception is thinking that the fight is over because of national marriage equality laws.

The U.S. Supreme Court decision legalizing marriage equality is not even a decade old, and individuals are still at risk of being beaten and killed for their sexuality and gender identity.

Dozens of countries around the world still have not legalized same sex marriage, with some countries legalizing death penalties for same sex couples.

When talking about LGBTQ+ equality and engaging in activism, it is vital to talk with family, friends, and loved ones in one’s own community.

Elis Jimenez, a 21-year-old trans man from Bayonne, recently came out about his gender identity and was shocked by his mother’s reaction because he didn’t remember discussing it with her.

“She asked me if I remembered being in high school and asking to go on testosterone,” Jimenez said. “I think I didn’t remember because when I originally brought these ideas to her, I felt rejected and was told I had to wait until I was 18. I tried to express this side of myself by wearing binders and even looking for wigs with ‘masculine’ haircuts on Amazon.”

While he felt that his mother validated his experience and identity, Jimenez also felt as though he wasn’t fully supported by his environment and tools at hand.

“I coped by suppressing that part of myself. My mom reminding me of this experience felt like validation that I was becoming who I always wanted to become and was just finding myself again in my own way,” said Jimenez. “I understand now that she was just looking out for me, but I still wish I had more support with my gender identity growing up.” 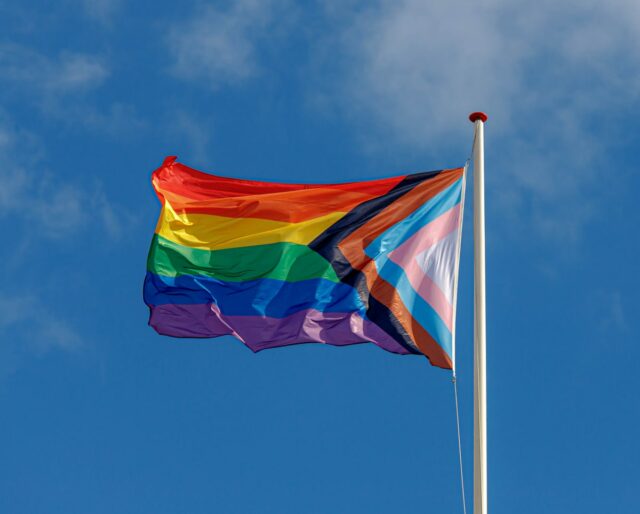 While people are generally becoming more accepting of the LGBTQ+ community, individuals in this community continue to face discrimination wherever they go, especially from family and loved ones.

Talking to their loved ones about their sexuality and/or gender identity is incredibly risky for LGBTQ+ individuals, as they may be kicked out of their homes or abused by those in their lives.

When reflecting on his experience with bullying, Jimenez said, “In high school, I always had a best friend who supported me, and I always tried to support her as well. I felt comfortable being myself around her until I saw messages of her calling me a ‘d*ke.’ It felt really invalidating to my sexuality and gender, since I identified as non-binary at the time. It made me realize even people who love you can be bullies and fail to respect you.”

When discussing Pride Month, LGBTQ+ individuals everywhere, including Jimenez, take the time to be grateful for the privilege they have in a world where they are accepted far more than they were years ago while also acknowledging that work still needs to be done.

“Pride Month to me is the time of year where I accept my privilege the most and feel the most thankful to the individuals who died for the LGBTQ+ community to have rights. It is a time where we are often more targeted and seen on display and also when some of the most historic things have happened like marriage equality throughout all 50 states,” said Jimenez.

“To me, it feels like the world is lowkey saying ‘everything is okay’ just because Pride Month exists, but at the end of the day, so much needs to be done for human rights.”

Even though more people are openly standing with and identifying as members of the LGBTQ+ community, Jimenez is surprised at how many people have been showing their support.

“Most people who are younger than me and my age are always informing older generations and are taking more action than in the past because of social media. I think the most impactful thing is seeing and experiencing the supportiveness of the LGBTQ+ community and how it feels like a giant community of love.”

During a time where LGBTQ+ rights are still in jeopardy due to a largely conservative Supreme Court potentially looking to overturn these laws, the commercialization of Pride as a party that people attend with their friends in rainbow apparel as well as corporations changing their social media profile pictures to rainbow logos and promoting Pride Month sales on their websites continue to raise concerns among the community.

The origins of Pride as a protest are quickly being forgotten, as Pride celebrations across the country are approved by government entities and thus changing their status from a protest to a parade.

While the laws surrounding LGBTQ+ equality are responsible for this status change, it is still essential to remember and honor the LGBTQ+ activists that led us to where we are today, such as Marsha P. Johnson, Sylvia Rivera, Audre Lorde, and many more, and remember to show our support the LGBTQ+ community year-round.

So, how can people become better allies? If someone is struggling with their own sexuality and/or gender identity, what should they do?

First, it’s important to recognize that your feelings are valid and to know that you’re not alone. It’s also great to want to learn more about the community and to know you will make mistakes along the way while you’re absorbing new information and engaging in activism.

When discussing the subject of figuring out one’s own identity, Jimenez said:

“As a kid, I always felt different and somehow thought that if I hid, no one would see me being different. Now the things that make me different are my favorite things about myself. I wish I could’ve told myself to embrace and understand those parts of myself, so that’s what I would suggest to any younger generations.”

Jimenez also shared advice on how to become a better ally when it comes to multiple social issues, not just issues exclusive to the LGBTQ+ community.

“I also believe that everyone should accept the responsibility that comes with their privilege. It’s important to have a comprehension of what every oppressed group experiences and to share their stories.

“We must eliminate gender standards, systemic racism, homophobia, and transphobia, so that people can be who they were all meant to be, which is an individual who can make their own choices.”

Sometimes, it’s hard to realize that you’ve be

Before Justin Bieber, we had Aaron Carter. The for

Sorry for the late post, we were busy making dinne